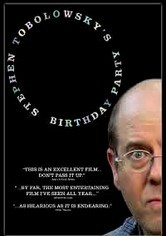 2005 NR 1h 27m DVD
As evidenced by his hilarious man-on-the-street interviews with everyday folks, most people don't know him from Adam -- but Stephen Tobolowsky is one of the busiest character actors in Hollywood. This refreshing documentary filmed at his birthday bash captures Tobolowsky's musings about working alongside some of Tinseltown's most recognizable faces and, perhaps for the first time, allows him to be the star of the show.