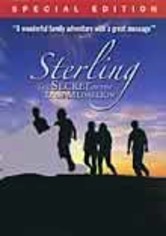 2003 NR 1h 21m DVD
Nick Sterling (John Dockens) wants to keep his father's old youth retreat going after his dad's death. Little does he know that there could be a treasure hidden on the land, and his evil brother, Archer (Benny Costanza), will stop at nothing to find it. But it's Nick's son, Alex (Bradley Dorsey), and his friends who find an old journal and the clues to the hidden whereabouts of a medallion that once belonged to King Solomon of Israel.