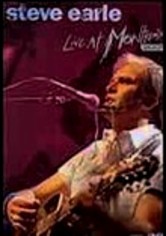 2005 NR 1h 5m DVD
Stripped down to his harmonica and acoustic guitar, Steve Earle delivers yet another unforgettable solo concert, filmed live at the world-renowned Montreux Festival. Serving up a wide selection of his music, Earle engages his audience with a raw vulnerability as he unravels classics from his early repertoire as well as tracks from his later career. Songs include "Jerusalem," "The Mountain," "Copperhead Road" and "What's a Simple Man to Do."