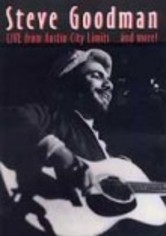 2003 NR 2h 2m DVD
The late Steve Goodman is honored in this collection of the singer-songwriter's performances on "Austin City Limits." Also included are interviews with fellow musicians Arlo Guthrie, Kris Kristofferson and John Prine, who pay tribute to Goodman. Hailing from Chicago, Goodman worked his way into the folk music scene, wrote the well-known song "City of New Orleans" (Guthrie's recording of the song was a 1972 hit) and earned two Grammy awards.