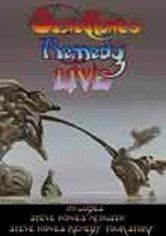 2004 NR 2h 30m DVD
This musical treat features Yes guitarist Steve Howe in a live performance with his side venture, Remedy, during a 2004 European tour. Besides the concert, the video contains two fascinating extras, the first of which captures Howe playing some of his trademark solo acoustic works before an appreciative audience. The second bonus item ("Tour Story") documents behind-the-scenes action with recording-studio footage, backstage video and interviews.