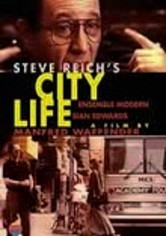 1995 NR 1h 1m DVD
Delve into the life story and professional career of musical genius Steve Reich, considered one of the greatest American composers of the 20th century. Manfred Waffender's documentary reveals how Reich's minimalist style and phrasing innovations have altered the direction of musical history. Special attention is paid to "City Life," a collection of everyday streets sounds brought together to create an aural representation of the urban landscape.