Steve Vai: Live at the Astoria 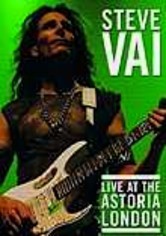 Steve Vai: Live at the Astoria

2001 NR 1 discs
In his first solo video release, award-winning guitarist Steve Vai (formerly of David Lee Roth, Whitesnake, Frank Zappa, 777 and more) presents one fantastic jam after another. Recorded at the Astoria in London in December 2001 amid a tour supporting his Alive in the Ultra World album, Vai's play list is more than two hours of his original work (and a few Jimi Hendrix covers, among others), and this video includes an abundance of bonus material.