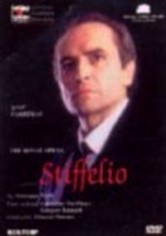 1993 NR 2h 3m DVD
Staged at London's world-renowned Covent Garden, this first-rate 1993 production of composer Giuseppe Verdi's tragic opera centers on a Protestant minister whose faith is destroyed after discovering his wife's affair with a family friend. Tenor José Carreras heads the cast as the titular clergyman, with legendary soprano Catherine Malfitano as his adulterous spouse and baritone Gregory Yurisich delivering a topnotch performance as her father.