Stir of Echoes: The Homecoming 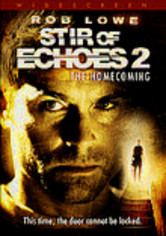 Stir of Echoes: The Homecoming

2007 R 1h 29m DVD
Rob Lowe stars in this spooky drama about a National Guard captain who returns from Iraq to find himself haunted by visions of the civilians he accidentally killed during his tour of duty in the war-torn nation. Losing his grip on his family as well as his sanity, the beleaguered veteran enlists the help of a psychic to silence the spirits -- but it turns out the seer is as sick as the vet, who now realizes he must resort to drastic measures.