Stomping on the Yard 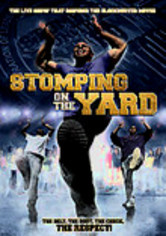 Stomping on the Yard

2006 NR 1h 30m DVD
Keshia Knight Pulliam and Fonzworth Bentley serve as co-hosts for the National Step Show Championship, which draws the best competitors in the United States to one stage for the opportunity to strut their stuff and vie for the crown. Known as the Super Bowl of stepping, the Super Stomp event celebrates an age-old art form kept alive by the fraternities and sororities of historically black colleges.