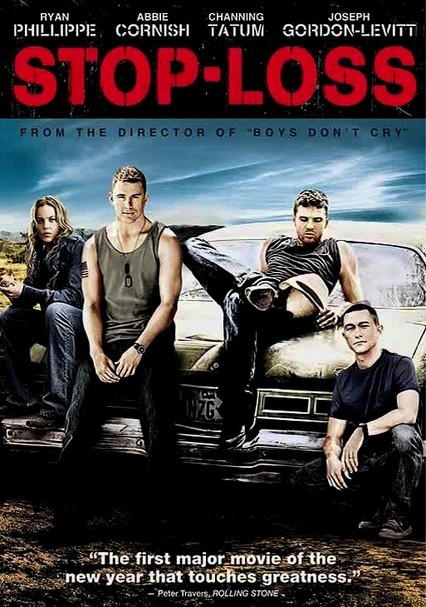 2008 R 1h 51m DVD
After a tour in Iraq, decorated hero Sgt. Brandon King (Ryan Phillippe) returns home to his small Texas town and tries to readjust to civilian life. But when he's called up again as part of the military's controversial stop-loss program, he decides to go AWOL. Joseph Gordon-Levitt and Channing Tatum play Brandon's war buddies, and Timothy Olyphant is his stern commanding officer in this poignant antiwar drama from director Kimberly Peirce.

Parents need to know that this mature war drama features some pretty graphic violence, including shootings, explosions, and angry fistfights, all of which result in bloody injuries, broken bodies, and deaths. These images appear both in present-time and in traumatic flashbacks. There are some sexual allusions and rowdy slang; other language includes frequent use of "f--k" and other obscenities.

A video of a sergeant's girlfriend is sensuous (not explicit); his buddy comments on her "t-tties." When Steve is drunk, he strips to his underwear and passes out. Scantily dressed women appear at a distance; someone calls them "hookers" (and they look the stereotypical part).

A shooting at a checkpoint leads to an ambush, which includes more shooting, explosions, and bloody bodies. Images of body bags and wounded men on gurneys; flashbacks throughout the film cut to bloody, loud fighting. At home in Texas, two men fight (punching and wrestling). Drunken men shoot at bottles and a snake. A soldier hallucinates that his friend is drowned in a pool. Two friends argue over one giving his fiancée a black eye. A man hits his guards and escapes custody. Brandon describes a soldier's violent death. A soldier is beaten by three robbers; he then beats them and scares them with a gun, leaving with a very bloody cut over his eye. Rico is injured in Iraq: At the hospital, he's scarred, blind, and missing an arm and a leg. A character shoots himself off screen. Two friends fight in a cemetery, sputtering, falling, and bruising.

Characters break the law, get roaring drunk, and fight. In Iraq, soldiers are ambushed, shoot at civilians, save friends, and make mistakes.

Heavy drinking (beer, tequila) and cigarette smoking at a welcome home celebration. A very drunk Steve digs a trench and wields his gun, and a drunk Tommy crashes his car. Soldiers, including Brandon, smoke cigarettes repeatedly and shoot at beer bottles and other objects while drunk. More drinking in a bar.