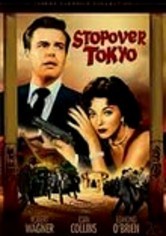 1957 NR 1h 40m DVD
American secret agent Mark Fannon (Robert Wagner) uncovers a communist plot to assassinate the United States' ambassador to Japan (Larry Keating), and plays a wicked game of cat and mouse with the would-be killer (Edmond O'Brien). Fannon's love, Tina (Joan Collins), finds the pressure of his work too much to bear, and he finds his allegiance torn between protecting the ambassador and saving his romance.