Storm of the Dead 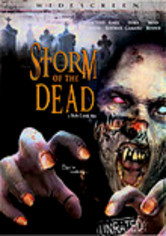 Storm of the Dead

2005 NR 1h 28m DVD
The president calls up a militia after a massive hurricane hits the Florida Panhandle and authorizes the troops to shoot any looters. But when they accidentally kill the grandson of a powerful voodoo queen, there'll be hell to pay. Soon, the team is on the run from dark forces beyond their comprehension in this bloody horror film starring Jason Todd Smith, Karin Justman and Debra Cassano.