Story of the Fighting I: The USS Intrepid 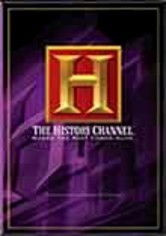 Story of the Fighting I: The USS Intrepid

1995 NR 0h 50m DVD
Seventeen stories tall and three football fields long, the magnificent &NFiUSS Intrepid&NFi_; was one of the fiercest warships ever to steam out of a Navy shipyard. From the epic World War II battle for the Leyte Gulf to its service during Vietnam, the "Fighting I" and her crew could always be found at the center of the action. Trace the story of this mighty carrier and the men who fought and died on her decks.