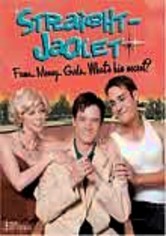 2004 NR 1h 36m DVD
When a tabloid gets wind of the sexual predilection of silver-screen icon Guy Stone (Matt Letscher), he attempts to hide his homosexuality by wedding a naive studio secretary (Carrie Preston) -- who doesn't know the marriage is a sham. Although Guy tries to make the best of it, he soon finds himself falling for screenwriter Rick Foster (Adam Greer), who's also harboring secrets in this spoof of starchy 1950s Hollywood.