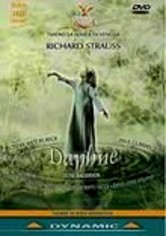 2005 NR 1h 54m DVD
Filmed live at Venice's Teatro la Fenice in 2005, this production of Richard Strauss's opera features a magnificent performance by soprano June Anderson in the title role. Innocent Daphne loves nature, though she remains indifferent to human romance -- much to the chagrin of her would-be suitor Leukippos. But when the god Apollo takes an interest in Daphne, things get complicated. Roberto Sacca and Birgit Remmert co-star.