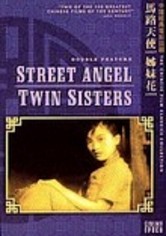 1937 NR 3h 0m DVD
This double bill features a pair of classics from 1930s Chinese cinema. Street Angel follows two sisters (Huishen Zhao and Xuan Zhou) who flee occupied Manchuria for Shanghai, where they're forced into servitude: one as a hooker and the other as a cathouse chanteuse. In Twin Sisters, siblings Da and Er (Die Hu, in a dual role) -- separated as infants -- are unknowingly reunited when the impoverished Da becomes a servant in her twin's household.