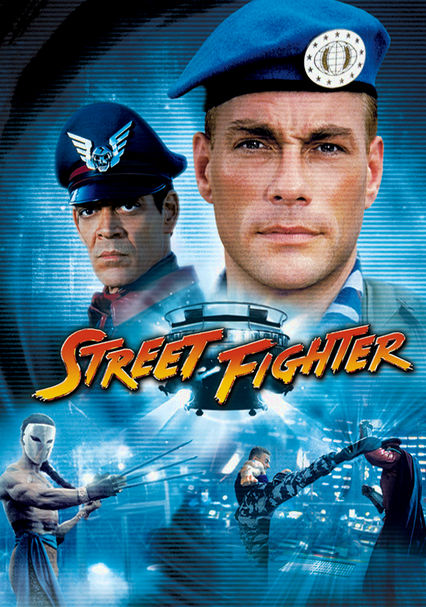 1994 PG-13 1h 42m Blu-ray / DVD
Leading an international army isn't easy, but Col. William Guile is ready for a challenge -- which is exactly what he gets when a malevolent warlord kidnaps a busload of Guile's Allied Nations relief workers and holds them for ransom.

Parents need to know that this movie is based on a well-known martial-arts video game (albeit one not infamous for gruesome violence, as the Mortal Kombat line was), and consequently, there's a lot fighting (believe it or not). Characters are kicked, pummeled, shot at, slashed at, electrocuted, and so on. Almost all of it is bloodless and not taken terribly seriously, though a few seconds of genuine war-atrocity news stock footage are worked into the fantasy. There's no need to be familiar with the game to enjoy the movie, but it helps with character recognition. There's some scattered swearing, smoking, and drinking, and a reference to the drug trade.

Some cleavage-baring, skimpy superheroine- or harem-type outfits. A few concubine-style women are offered to male characters at one point (the men decline). A blink-and-you'll-miss-it homosexuality joke.

Very little blood shown (and the blood we do see turns out to be fake, in a hoaxed gundown); still, there is "cartoon violence" combat of all sorts, from martial-arts fisticuffs to shooting, electrocution/death rays, slashing with a sort of claw-weapon, massive explosions, etc. Some fatalities, including necks snapped by the villain. One character whipped (but he ignores the pain). Some stock footage of genuine war scenes and atrocities.

Pretty clear-cut good guys and bad guys. Battling solves everything, more or less; some would-be peace negotiators are portrayed negatively. Ethnic representation across the spectrum, and a few empowered female characters (although, stereotypically, it's the Asian one, Chun-Li, who does the heavy-duty martial-arts fighting).

Hard to ignore that this movie wouldn't exist without the Capcom video game franchise on which it's based (specifically, Street Fighter II, if you're keeping score). There were also spinoffs in cartoon and comic-book and action-figure form.

Some social drinking. A few enemy soldiers light cigarettes. Brief mention of Bison's past as a drug lord.