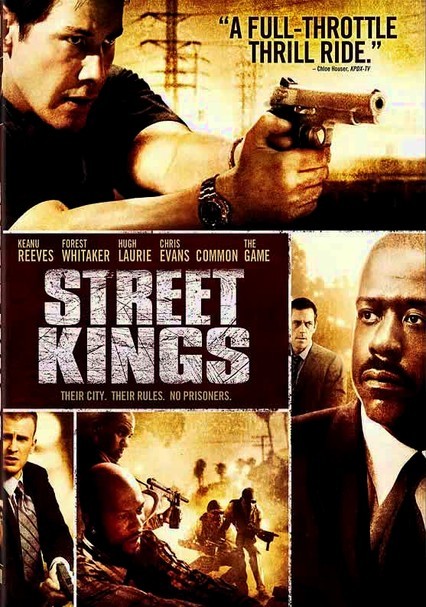 2008 R 1h 47m Blu-ray / DVD
Still reeling from the death of his wife, Los Angeles detective Tom Ludlow (Keanu Reeves) is devastated when he's named as a suspect in the murder of his partner (Terry Crews). With the help of a young homicide detective (Chris Evans), Ludlow struggles to clear his name. In the meantime, his boss (Forest Whitaker) tries to protect him from a tough Internal Affairs investigator (Hugh Laurie) who's determined to put Ludlow behind bars.

Parents need to know that this grim Keanu Reeves crime drama isn't for kids. The story (about corrupt cops) is brutal, the action is aggressive and bloody (leaving some characters with lacerations and bandages and others graphically dead), and the "moral" is familiar and subjective. Weapons include guns, knives, and cars; characters drink, smoke, and do drugs. There's some brief heavy breathing and kissing, as well as references to prostitution and rape (concerning young kidnapped girls). Language is incessant, with the favorite term being the standard cop-movie expletive, "f--k."

Rescued kidnapped girls had been caged and tied; some discussion that they've been raped and used for prostitution. Flirting and passionate kissing between Tom and Grace (she closes a hospital curtain so they can embrace). Sexual slang includes "p---y," "prick," and "blow job."

Corrupt cops, cruel criminals, and frustrated women (all of whom are girlfriends and wives, not cops or criminals). Some iffy racial undertones.

Chips, sodas, and beer labels are glimpsed in a convenience store.

Cigarette smoking and drinking (beer, vodka, other liquor) by major and minor characters; marijuana use. Thematic focus on drug dealing, which involves several shots of piles of drugs (referred to as "dope"). References to Viagra and illegal drugs.