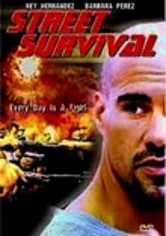 2005 NR 1h 35m DVD
Once a respected and feared special forces commander, Eric Hughes (Rey Hernandez) is now targeted for assassination by the government. Besieged and on the run, he finds refuge by hiding among the homeless, who become his allies. As Eric learns new strategies to help him survive on the streets, he makes plans for a final confrontation with his former comrades in arms, now his deadliest enemies.