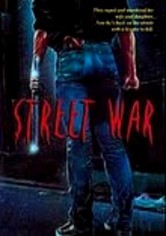 1976 NR 1h 30m DVD
After being dismissed for use of excessive force, former cop Murri (Maurizio Merli) soon finds himself back on the job as the only man who can stop a brutal crime spree. When a mob boss escapes from prison and re-forms his gang, Murri is called on to organize a crackerjack team to put an end to the gang's reign of terror. Fueled by vengeance, Murri stops at nothing to finish off the boss once and for all. Cyril Cusack and James Mason also star.