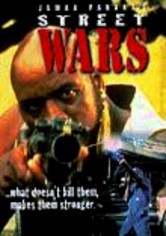 1992 R 1h 32m DVD
When his drug lord brother, Frank (Bryon O'Dell), is assassinated by rivals, straitlaced Exeter Academy aviation cadet "Sugarpop" (Alan Joseph) abandons his military career and assumes command of the underworld operation. Determined to legitimatize the operation, Sugarpop transforms the cartel into a militant strike force and sets out to seize control of the streets and avenge his brother's murder.