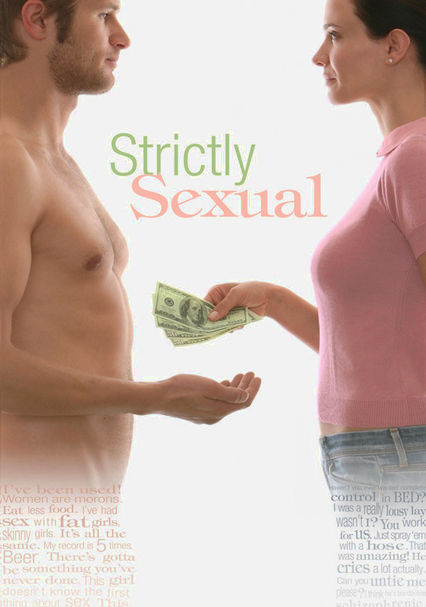 2008 R 1h 39m DVD
Tired of the emotional hassles of dating and relationships, successful and beautiful pals Donna (Amber Benson) and Christi Ann (Kristen Kerr) decide to keep two unemployed New York construction workers (Johann Urb and Stevie Long) around in a "strictly sexual" capacity. The plan works like a charm -- until love starts to rear its inconvenient head in this savvy "Sex and the City"-style comedy, also starring Brooke Allen as Cassandra.

Parents need to know that this mature drama focuses on the age-old question of whether people can have sex without becoming romantically attached. The twist here is that it's the women who are pursuing the casual encounter, but it's less surprising that the main characters all start to develop feelings for each other. The film shows adults in adult situations, with plenty of drinking and smoking and a few people smoking marijuana. There is plenty of profanity and many explicit discussions about sexual activities. The numerous, graphic sex scenes feature lots of thrusting and sound effects, but no actual nudity.

The entire story revolves around sex. Two women, looking for no-strings-attached sex, pick up a pair of guys that they mistakenly think are gigolos. Most of the film features the two couples either having sex or discussing sex. There are scenes that feature bondage, role-playing, oral sex, and anal sex, and plenty of frank talk about all of the above. Given the explicit nature of the movie, it almost seems odd there is no actual nudity, male or female. The characters are always covered by sheets when in bed, and rarely seem to actually be naked, though women are sometimes seen in their bras.

Quite profane. Characters drop the F-bomb into almost every sentence, it seems, using the word both to emphasize various points and to discuss their sexual activities. Also includes "a-hole," "dick," "bitch," "Goddamn" and "s--t."

No-strings-attached sex rarely comes without entanglements. The men and women in this film both seem to enjoy, initially, an arrangement that is all about sex without commitment, but soon start to develop feelings for their partners. One woman is very sensitive about her weight, despite the fact that she seems to have an average build. In a terrible fight, her boyfriend goes for the jugular and needles her about it.

Some brand names are mentioned, including Cosmopolitan magazine and Drakkar Noir cologne.