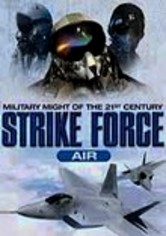 2007 NR 5 discs
The fighter power of the United States Air Force is examined in this collection of documentaries that follows the evolution of combat planes and technology. From the first Army flight school in College Park, Md., in 1911 to the future of fighter aircraft, go behind the scenes for an up-close look at the B-29 FiFi, B-1B Lancer, KC-135 Stratotanker, C-130 Hercules and more. Also included is footage of the air raids in Operation Iraqi Freedom.