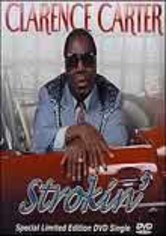 2004 NR 0h 4m DVD
Legendary blind blues performer Clarence Carter performs one of his trademark tunes from the Fame Studios period of the late 1960s and early 1970s, when he helped define the musical style emerging from the Alabama town of Muscle Shoals. The controversial "Strokin,'" with its highly suggestive lyrics and single-minded focus on romance, is one of Carter's best, and music lovers often include it on their lists of the most sexy songs of the era.