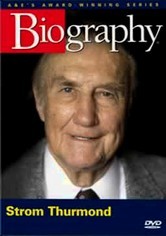 1998 NR 0h 50m DVD
Explore the life of one of the most controversial U.S. politicians of the 20th century, South Carolina Sen. Strom Thurmond. After changing political parties to become a Republican in 1964, Thurmond led the fight against the Civil Rights movement. Serving in the Senate for 49 years, he left office at age 100, and after his 2003 death, it was publicly revealed that he had fathered a child in 1925 with his family's teenage African-American maid.