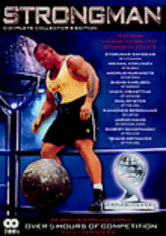 2006 NR 2 discs
Watch some awe-inspiring feats of strength as the most powerful athletes in the world compete to win the ultimate title of IFSA World's Strongest Man. This riveting series of contests features exclusive footage of the massive men as they break 11 world records in an astonishing 2005 tournament. Athletes include Lithuania's Zydrunas Savickas, Russia's Mikhail Koklyaev, Estonia's Andrus Muramets, the United States' Phil Pfister and many more.