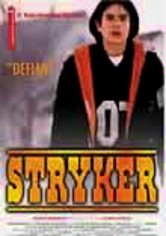 2005 NR 1h 33m DVD
In the farthest reaches of Winnipeg, a battle is waged for the soul of a village and its residents. A Native American teenager (Kyle Henry) with a penchant for starting fires ignites much more than tinder; instead, he inflames an already simmering gang war between Omar (Ryan Black), leader of the Asian Bomb Squad, and Mama Ceece (Deena Fontaine), who heads up an all-girl posse. To the victor go the spoils.