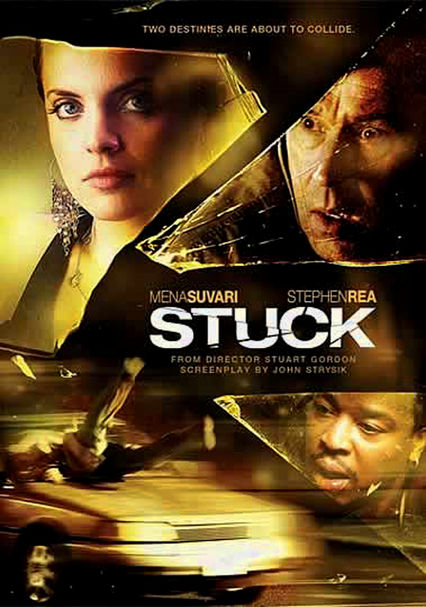 2007 R 1h 25m Blu-ray / DVD
Driving home after a night of partying, Brandi (Mena Suvari) accidentally crashes into pedestrian Tom (Stephen Rea), who gets stuck in her car's windshield. Brandi struggles with whether to help save this man's life or simply let him die and thereby protect her career. In extreme pain and with little time left to live, Tom pleads for Brandi's help and tries to find a way to escape from his glass prison in this horrific thriller.

Parents need to know that this film uses violence, blood, and gore -- along with graphic sex and drug use -- to make the point that, in one character's words, "anybody can do anything to anyone and get away with it." A man is stabbed in the face with a pen, a graphic sexual scene is intercut with scenes of a blood-covered man in excruciating pain, a nursing assistant must clean up the visible excrement of an elderly patient, a dog chews on the bloody leg of an incapacitated but conscious man, and so on. The language is similarly strong, with everything from "f--k" to "bulls--t" used frequently. In other words? Not for kids!

Very violent and bloody car accident in which a man's head crashes through the windshield; gory aftermath of accident is shown in scene after scene; point-blank gunfire; a woman is set ablaze and burns to death on camera; a man is stabbed in the face with a pen.

Amoral, monstrous behavior moves the plot from beginning to end. From the lowliest landlord in a sleazebag hotel to a suit-and-tie government bureaucrat, the characters have no moral compass. Cruelty, selfishness, and indifference consistently override common decency.

Drugs (Ecstasy, marijuana) used on several occasions. Characters drive while under the influence. A main character is a drug dealer. Alcohol is consumed in several scenes.