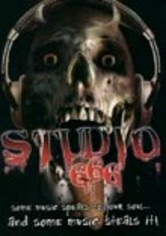 2005 NR 1h 16m DVD
Spurned by a fellow band member who's rejected her advances, rock singer Cassidy (Kacia Brady) commits suicide in a very public manner. Seeking answers about her death, the band hires a psychic, who unwittingly stirs up Cassidy's vengeful spirit. Now, the band has to contend with not only cutting their first album, but also with a murderous ghost hell-bent on stopping the music -- permanently. Corby Timbrook directs this horror tale.