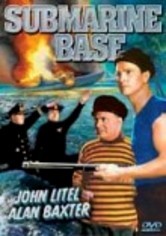 1943 NR 1h 4m DVD
After surviving a shipwreck off the coast of South America, cop turned merchant mariner Jim Taggert (John Litel) comes face-to-face with ex-gangster Joe Morgan (Alan Baxter), who's been hiding out in the Southern hemisphere. To make matters worse, it seems Morgan's been supplying the Nazis with torpedoes. But little does Taggert know, there's more to the operation than meets the eye. Fifi D'Orsay co-stars in this World War II-era drama.