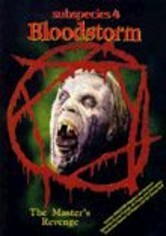 1998 R 1h 30m DVD
The blood flows like beer at a college frat party in this gothic horror film, the last of the "Subspecies" series. When fledgling vampire Michelle (Denice Duff) tries to escape the control of master vampire Radu (Anders Hove), the evil Radu must attempt to bring her back to his lair before a doctor can reverse the vampire spell. Includes behind-the-scenes footage and commentary from director Ted Nicolaou.