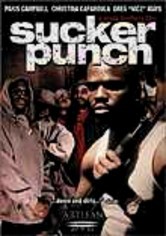 2003 R 1h 20m DVD
Mike Sullivan believes he can get ahead by collecting runaway girls that his boss, Lamar, can add to his stable of prostitutes. But when Mike realizes this life won't lead him anywhere clean and decent, he tries to reform -- and must suddenly protect himself from the vengeful battle waged against him by Lamar and his hard-hitting posse. A gritty tale of urban corruption, crime and prostitution that hits you right in the solar plexus.