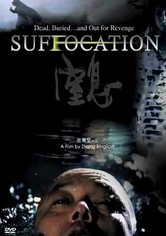 2005 NR 1h 29m DVD
Chinese superstar You Ge stars as Chen Xiao, a schizophrenic haunted by … a cello case. Chen may have killed his unfaithful wife and buried her body on the beach, and her ghost may be dwelling in the cello case he used to move the body. Haunted by his possible misdeed and tortured by his mental sickness, Chen descends further into madness in this psychological thriller from mainland China, which features a surprising dose of black comedy.