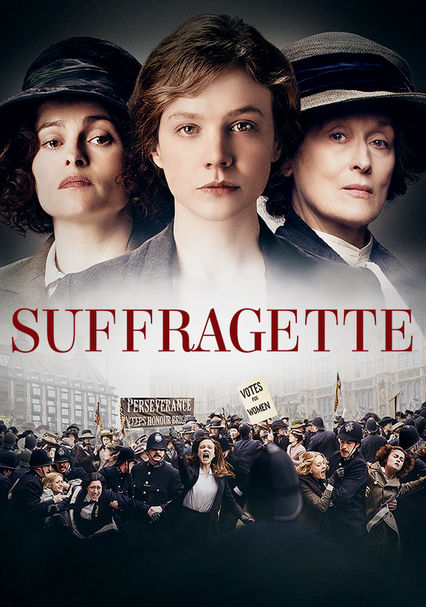 2015 PG-13 1h 46m Blu-ray / DVD
Dreaming of the right to vote, working-class Maud eagerly joins the early feminist movement. But when the peaceful protests of the suffragettes accomplish nothing, they're driven to more radical methods of effecting change.

Parents need to know that Suffragette is a powerful drama about an important time in the history of women's rights in Great Britain. The story about a quiet laundress (Carey Mulligan) who joins a group of militant "soldier suffragettes" in 1912 London has moments of upsetting violence (possible spoiler alert): Women are kicked, hit, and beaten by police officers (with some blood shown); public and private property is vandalized and blown up; a prisoner on a hunger strike is painfully force-fed; and a character is trampled by a horse. A man assaults a 12-year-old girl (the only on-screen incident is interrupted, but others are implied), and -- in one of the film's most wrenching moments -- a young child is forcibly taken away from his mother, both of them in tears. There's a bit of smoking and drinking and one non-sexual moment of nudity when a woman is processed into prison. Minor strong language includes one use each of "damn" and "bitches." The movie's messages about equality, standing up for what you believe in, and speaking out against injustice are undeniably important, but the idea that violence is the only effective means to an end is tricky.

Maude and her husband are affectionate early in the movie; they share a bed (clothed snuggling shown). A couple of lewd comments. Non-sexual nudity includes a glimpse of Maude's bare bottom when she's stripped while being processed into prison.

Frequent, though not particularly graphic. (Possible spoiler alert!) Militant suffragettes hurl rocks through windows, prepare explosives, bomb letter boxes, cut telegraph wires, and blow up a house; one becomes a martyr to the cause after being trampled by a horse. Law enforcement officers kick and hit protesting women with fists and batons (some blood/wounds visible) and knock them down. A jailed woman on a hunger strike is force-fed in a disturbing sequence (pain, struggles, screams). Laundry accidents/injuries mentioned; incident with a hot iron. Arguing, shouting. A man forces himself on a young girl (one on-camera incident is interrupted; other assaults/abuse implied/referred to). Extremely upsetting scene of a child being taken from his mother.

Single uses of "bitches" and "damn."

Many important messages: Women deserve equality; believing in something bigger than yourself can offer hope and comfort when it seems like all is lost; friends take care of you and stand up for you; and no matter how difficult it is, you should speak out when you see injustice. On the other hand, messages also include advocating violence as a means to an end and giving up everything you love for a cause.

References to having a brandy; friends share a flask after a stressful event. Maude smokes cigarettes on a few occasions.