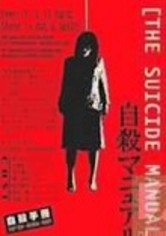 2003 NR 1h 26m DVD
Police make a grisly discovery in a rundown apartment: the bodies of four apparent suicides. They also find an unmarked DVD, the so-called "Suicide Manual." When a tabloid TV reporter (Kenji Mizuhashi) encounters a girl (Ayaka Maeda) who was supposed to be among those dead at the apartment, the pieces of a mysterious puzzle begin to come together. Osamu Fukutani directs this chilling entry in the genre of modern Japanese horror.