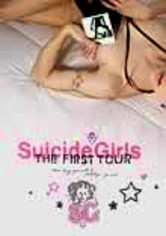 2005 UR 1h 50m DVD
With names such as Snow, Nixon, Reagan and London, these tattooed and pierced ladies aren't your grandfather's kind of burlesque act. This titillating documentary captures the in-your-face SuicideGirls' first-ever cross-country tour in 2004, performing 60 shows in 45 cities, each time worshipped by an undisciplined, sold-out crowd. But take note: As one might expect, this flesh-filled punk-rock striptease contains a generous portion of nudity.