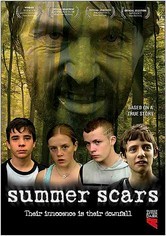 2007 NR 1h 7m DVD
Six 14-year-olds cut school to joyride in the woods, where they meet Peter (Kevin Howarth), an adult drifter who invites himself to hang out with the youths. When Peter starts playing ruthless mind games on the kids, the day soon devolves into a hostage crisis. But through it all Peter seems determined to teach the kids a lesson about growing up. The unsettling coming-of-age drama was nominated for Best Film at the 2008 Welsh BAFTA Awards.