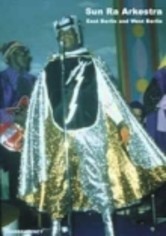 2005 NR 2h 33m DVD
This video captures innovative jazz composer, bandleader and pianist/synthesizer player Sun Ra's two live concert performances in East Berlin in 1986. Claiming that he was of the "Angel Race" and not from Earth but rather Saturn, the eccentric Sun Ra developed a complicated persona embracing cosmic philosophies and composing lyrical poetry that preached peace and condemned racism (which he experienced firsthand while touring with the Arkestra).