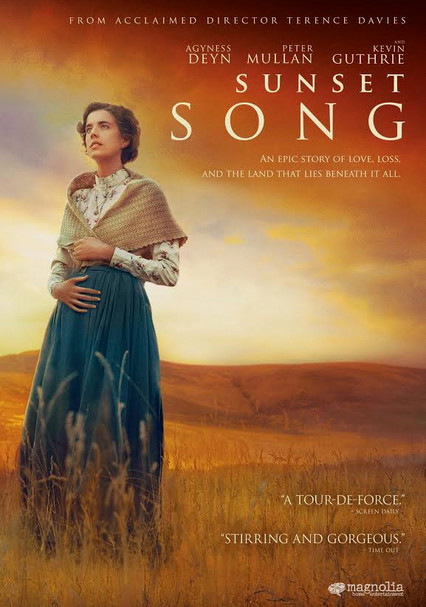 2016 R 2h 15m DVD
In early 20th-century Scotland, farmer's daughter Chris Guthrie dreams of making her way in the world, but life has other plans for her. When a series of tragedies leaves Chris in charge of the land, she rises to the challenge. She even finds love.

Parents need to know that Sunset Song is a period drama based on Lewis Grassic Gibbon's acclaimed novel about growing up in rural Scotland in the early 1900s. It centers on Chris, a young woman who's spent her whole life on the family farm. Her already-difficult lifestyle is made even more challenging by her violent, domineering father, and the movie has several scenes of surprisingly violent brutality -- including beatings, wartime shooting, the implication that a man is considering forcing himself on his teenage daughter, and a husband violently demanding sex from his unwilling wife. Brief scenes show full female nudity and a newlywed couple in bed. There's also some drinking and smoking and a few uses of the word "bitch."

Brief scenes of a fully nude woman and a newlywed couple naked in bed.

A tyrannical father terrorizes his family, especially his adult son, whom he beats severely (with a belt). A brief scene also shows soldiers shooting their weapons in wartime. One scene suggests that a man is considering forcing himself on his teenage daughter; another shows a husband violently demanding sex from his unwilling wife.

Some men use the word "bitch" to women.

Life can be difficult, sometimes unbelievably so, but certain people can find the strength to carry on, no matter what.