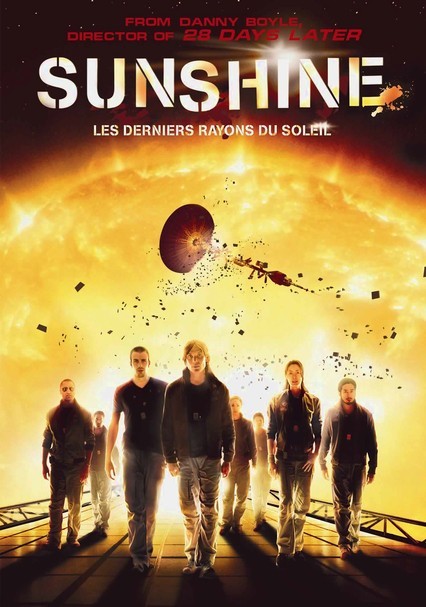 2007 R 1h 50m Blu-ray / DVD
With permanent darkness looming, scientists devise a plan to reignite the sun before the lights go out forever. To do so, a crew of astronauts is sent hurtling through space on an intense mission to determine the fate of the planet.

Parents need to know that this film isn't for kids; in addition to some brief, very violent scenes, it features extended discussions of intellectual and philosophical issues. Violence includes shots showing the effects of intense sunlight on human flesh (burned, bubbly, and scarred), a couple of vigorous fistfights between crewmembers, the very affecting death of a crewmember who is accidentally loosed in space (he freezes, face in close-up, and his face and then his shatter); a suicide victim appears so his slashed wrists are visible and blood is everywhere (crewmembers display upset); bodies in previous ship appear huddled together and burned to ash; final chase/fight is extended and violent; final explosions are fiery, loud, and devastating (also rather poetic). There are repeated uses of "f--k," with some other profanity.

Several startlingly bloody and harsh images. Two male astronauts fight with each other a couple of times (hard-hitting fists and grunts); discovery of dead bodies in another ship (they're mostly shadowy, and have burned to death); an astronaut floats loose in space, his death by freezing shown graphically and briefly (face shatters, then blood shatters); a crewmember has nightmares of falling into the sun; a crewmember slashes his wrists off-screen, with his bloody remains explicitly displayed; extended killing sequence by the figure the crew meets at the end includes bloody stabbing (bloody handprints and splashes all over walls and windows), freezing in liquid, fighting and running, falling; eventual bomb explosion into the sun comprises a lengthy scene, very bright light, lots of flames.

Crewmembers argue with each other and show selfishness, then support each other absolutely when faced with a larger threat.