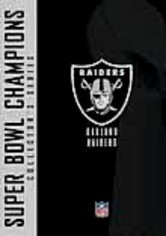 2005 NR 2 discs
Be at midfield to relive the most celebrated moments from Oakland's three Super Bowl triumphs -- from their trouncing of the National Football Conference champion Minnesota Vikings in Super Bowl XI to their underdog victory over the Washington Redskins in Super Bowl XVIII. This set features hours of exclusive game footage, along with candid interviews and expert commentary from the most unforgettable figures on the Raiders' roster.