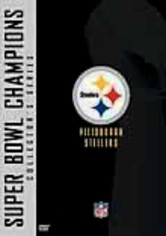 2005 NR 2 discs
Be at midfield to relive the most celebrated moments from Pittsburgh's spectacular Super Bowl run in the 1970s. From the yellow and black's dynasty-launching victory over the Minnesota Vikings in Super Bowl IX to the Steelers' record-breaking, second back-to-back National Football League title in Super Bowl XIV, you'll see it all. These great videos feature hours of Super Bowl game footage, season highlights, interviews and commentary.