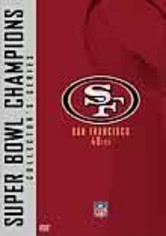 2005 NR 2 discs
The 49ers earned the right to be called the "Team of the '80s" after claiming four Super Bowl titles with National Football League legend Joe Montana at the helm and Jerry Rice on the receiving end of passes. San Francisco extended its dominance into the 1990s with another Hall of Fame quarterback, Steve Young, becoming the first franchise in NFL history to win five Super Bowls. Includes hours of game footage, interviews and commentary.