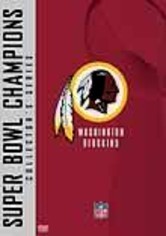 2005 NR 2 discs
Be on the sidelines to relive the most memorable moments from Washington's three Super Bowl victories. Included are the Redskins' fourth-quarter heroics against the Miami Dolphins in Super Bowl XVII, quarterback Doug Williams breaking records in Super Bowl XXII and the team's victory over the Buffalo Bills in Super Bowl XXVI. The video feature hours of exclusive NFL Films footage, along with revealing interviews and commentary.