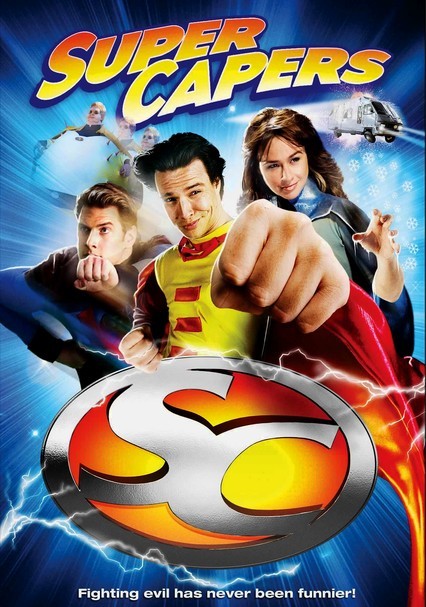 2008 PG 1h 34m DVD
When wannabe superhero Ed winds up in court for brutality, the judge orders him to team up with the Super Capers, a group of inept trainees. The group fights evil, but when Ed is framed for a heist, he must travel back in time to set things right.

Parents need to know that this superhero action comedy, while not particularly thrilling or creative, is age appropriate for tweens. The hero ultimately makes the right choices, and there aren't dark, complex issues like those you'd find in a movie such as The Dark Knight. Expect some mild sexual innuendoes and salty language ("bitch," but no "S" or "F" words), as well as several cartoonish fighting scenes. Guns are also flashed, and one character combusts and turns into ashes. The lead character appears to have the power to make prayer come true, but it's played for (attempted) laughs. One character smokes a cigar.

Some pseudo-passionate kissing and sexualized verbal sparring. A man walks around in his boxers.

Guns are flashed, and there's some hitting, but the scenes play out like cartoons, and there's no gore or blood. A van flies through the air and hits a bridge. A man combusts and turns into ashes; another metamorphoses into a creepy puffer fish. Yet another has a brain that pulses when he's using telekinesis. A woman is able to "freeze" people.

Some salty language, including "moron," "jackass," and "bitch."

A character makes sexist jokes; others lie and betray. A hero briefly misbehaves by lying about valuable loot that he discovers and, for a moment, wants to keep for himself. But in the end, he chooses to do what's right.

Posters for various movies, including Return of the Jedi and Indiana Jones, plus verbal references to various films. Some signage.

One character puffs on a cigar; jokes about beer.