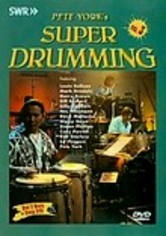 2008 NR 2h 35m DVD
Originally broadcast on German television, these clips feature some of the world's foremost percussionists at their rhythmic best. Pete York, Nippy Noya, Zak Starkey, Ed Thigpen, Billy Cobham and others perform a diverse repertoire of 40 songs. The tracks -- some of which were never aired -- include "Route 66," "Dixie Chicken," "I Can't Find My Way Home," "Calypso X," "Lady Be Good," "What Makes Moses Run" and "Old Man River."