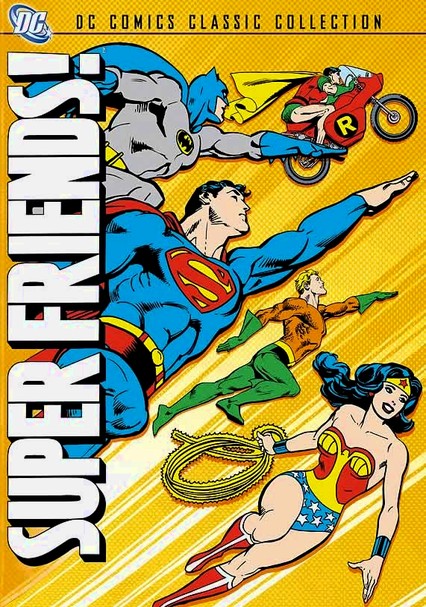 1973 TV-G 3 seasons
This classic cartoon series combined the powers of several popular superheroes -- including Superman, Wonder Woman, Aquaman, and Batman and Robin -- into one collective legion of crime fighters known as the Justice League of America.

Behold the Super Friends: Superman, Batman and Robin, Wonder Woman and Aquaman debut as an animated team in Vol. 2 of the first season of the Hanna-Barbera series. Mobilized by TroubAlert, the superheroes avert disasters both cosmic and mundane. Yet they prevail over Dr. Rebos, Prof. Baffles and other zealous brainiacs as much through reason as with force. Trainees Wendy, Marvin and Wonder Dog aid in the effort, as do Flash and Green Arrow.

Boasting 16 episodes of the cult classic cartoon, this compilation features the elite Justice League of America facing off against the Legion of Doom, an uneasy alliance of 13 infamous supervillains. Wearing the white hats are Superman, Batman and Robin, Wonder Woman, the Green Lantern and Aquaman, among others. Loathsome Lex Luthor leads the black hats -- including Brainiac, the Riddler and Solomon Grundy -- who aim to rule the universe.

This animated series features the Justice League of America -- the ultimate "dream team," made up of superheroes Superman, Wonder Woman, Batman, Robin, the Green Lantern, the Flash, Aquaman, Black Vulcan and more. Together, they battle formidable supervillains such as Brainiac, the Riddler, Lex Luthor and Bizzaro. This season, the Super Friends battle their robotic doppelgangers, and the Legion of Doom travels back in time.