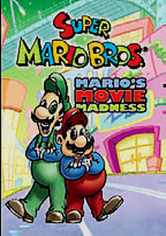 1989 NR 1h 15m DVD
It's the Brooklyn plumbers to the rescue as Mario and Luigi, stars of the 1980s video game Super Mario Bros., face off against King Koopa in these animated film parodies that include "Star Koopa," "Toad Warriors," "Robo Koopa" and "On Her Majesty's Sewer Service." Follow the action as Mario saves the Mushroom space colony from the evil Darth Koopa; fights the menacing Robo Koopa; helps Secret Agent James Blonde stop the criminal Koopa; and more.