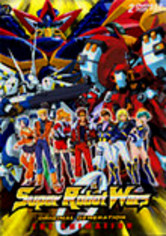 2006 NR 1h 25m DVD
Based on the popular video game series, this futuristic anime feature follows the plight of the Earth Federation, the last group of human beings on the planet, who are forced to defend themselves from elimination at the hands of an alien invasion. To give its troops a chance in battle, the Earth Federation Army has developed the "Personal Trooper," a mobile robotic weaponry system that fuses with the body of its human pilot to remain functional.